Here follows an analysis of the main 100 questions in the individual contest of the 2010 European Quizzing Championships.

Note: For one quizzer, the answer sheets from two of the eight rounds have become lost. To ensure uniform treatment throughout the quiz, this player has been removed from the analysis with the consent of the quizzer in question.

The average score among the 115 participants was 49.63%, ie very close to every second question being answered correctly on average. The distribution in difficulties was also very well spread out among the questions, as the following diagram shows. 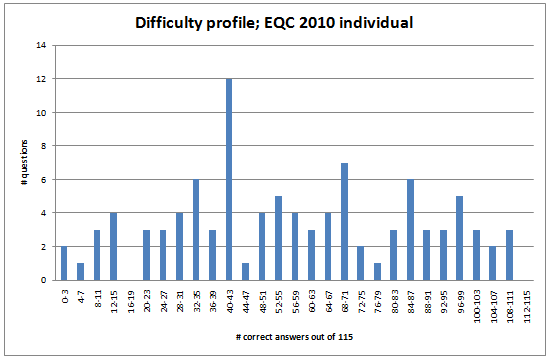 The easiest question of the quiz appears to have been about Jesus’s wounds; 111 out of 115 players got this right. It was followed by the artist Theotokopoulos (110), the Schwarzenegger state (108), who’s connected with Julius Harris, Yaphet Kotto, Forest Whitaker et al (105), and what’s on the other side of the Strait of Bonifacio (104).

In the following, various details about the players and questions will be shown in tables. Click on column headers to sort.


Legend: Points = points achieved; D-x = points on the x most difficult questions; E-y = points on the y easiest questions; Solo = number of solo points; similar for duo, trio and quartet points; D-points = difficulty-weighted points, ie as if every question yielded one point to share between players getting it right.

We see that Pat Gibson’s lead after the main rounds was built on doing well in the difficult half – he was 5 points ahead of number two Ronny Swiggers here, while Ronny was one in front on the easier half with an impressive 47 out of 49 correct.


Legend: QNo = running question numbering; Question = question summary; Corr = number of players who got it right; T-x = how many players out of the top x answered correctly; B-y = how many players out of the bottom x answered correctly; T-fav = the degree to which the question favoured the top of the list compared to the lower half (T-xminus B-y); Who = players with solo/duo/trio/quartet points.

The two questions that favoured the elite the most were, perhaps not surprisingly, rather hardcore geography and history; both the mountain ranges bordering the Deccan and the crazy emperor of 218–222 were answered correctly by 28 more of the top-59 than of the bottom-56. Two questions had the latter in the lead: the longest Iberian river (33 vs 37) and what you get when a newbie goes bad (11 vs 12).


We note that four players would have been enough to get all the 99 questions that were taken at all. This hypothetical half-English, half-Belgian team consists of Pattyn (naturally, as he had the solo point), Baes, Honey and Westcott.

Single-country statistics have been made for the nine countries that took part in the national teams competition: